This search form uses an instant search feature. As you type, search results will appear automatically below the search field. When you've entered you desired search terms use tab to navigate through the available results and hit enter to open the selected page or document.
Pioneer Volleyball in the Moutaineer News!
Heather Wolery
Thursday, August 20, 2020 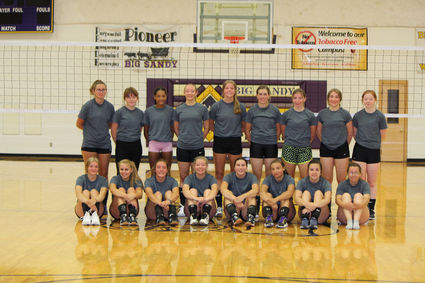 Before a single set is played, chalk one up in the "win" column for Big Sandy volleyball.

With all the chaos and uncertainty of the COVID-19 pandemic, the squad is well aware every match, every practice, every spike, every drill, every day they can suit up in purple and gold is a privilege.

"We are grateful just to be playing," said senior Alicia Bjornestad."Because it can be taken away at any time. I hope we can cherish this time together as a team."

The Pioneers are guided by second-year coach Brittany McKenney. They are a youthful, exuberant bunch, encouraged by a Cinderella run through districts in 2019. The girls kept improving all season long to earn an upset bid to the divisional tournament.

This season is defined by a team motto worn on the girls' practice shirts: "ait."

Perseverance defined the Pioneer program in 2019 and will be needed in spades to make the most of 2020.

"My main goal is that we just need to keep improving," McKenney said. "Each day, we get a little better. The (district) tournament, again, hopefully ... that is when we will reach our potential. We hope to be at our absolute best."

There is a steep learning curve. It will be difficult, if not impossible, for Big Sandy to pick up right where they left off. Five seniors who contributed heavily to last season's success are now graduated. A handful of expected returnees are battling injury or opting out of this season due to valid health concerns.

"We knew this would be a rebuilding year," McKenney said. "We are a younger team for the most part."

Seniors Bjornestad, Jozlyn Baumann, Noelle Beirwagen and Madison Terry are all veteran players who will be asked to take on a leadership role for a team heavy on underclassmen.

"(Alicia) is gong to be huge for us this year, one of my main leaders," McKenney said. "And Amiya (Griffith, a junior) is one who really put in the work this summer."

Griffith said she has finally regained strength lost after an injury during her freshman basketball season.

"I'm feeling a lot better," she said. "I like playing in the middle."

Griffith said she is encouraged by her team's chemistry fostered in open gym and the first week of practice.

"I think we're going to have a pretty good bond," she said.

"The dedication is there and so I'm happy for that," Bjornestad added.

McKenney said she hoped the Big Sandy girls could have had a spring club season to hone their experience but for COVID-19. The pandemic trimmed down open gym time but "some schools didn't get to have any open gym at all," she said.

"Everybody's in the same boat," McKenney said. "Nobody else had a club season either ... (but) we could have really benefited."

The coach said she wants to see her team build on their blue-collar effort that paid off in the end a year ago.

"I'm hoping that defensively, we'll be able to have that all-out grit this season," McKenney said. "Attacking, we have some pretty strong hitters so we hope we'll be stronger at the net."

Serving, receiving and especially passing will be points of emphasis in practice all year, she said.

COVID-19 altered the schedule such that there are no regular season tournaments. Districts would be the first time in that setting all season.

"Normally, you get that feel earlier in the year," McKenney said. "This time, we'll learn, you better be ready to rock and roll. (Elimination tournaments) create nerves but it also drives them to perform better. It especially drives upperclassmen (who) know that you've go to keep going or you're done."

"The community cheering us on, we enjoyed that, so we want to feel that again," she said.

The limits on having spectators in the gym are still not set in stone with the 2020 opener just around the corner on Thursday, Aug. 27, with Big Sandy hosting the perennial powerhouse Chinook Sugarbeeters. The C-team plays at 4 p.m., followed by junior varsity and varsity matches.

The Beeters are likely to be the team to beat again this season in the district, McKenney said, with a realignment for this season breaking the Northern C division into two 9-team leagues. Last season, there were three. Fort Benton, Geraldine-Highwood and Centerville will join the Pioneers, Beeters, Chester-Joplin-Inverness, North Star, Box Elder and Hays-Lodge Pole.

McKenney said her Pioneers have seen Fort Benton at tournaments last season but did not play them. With Geraldine-Highwood, "we had some intense matches," she said, sometimes decided by a pivotal fifth set. The Pioneers were able to defeat Centerville. With the larger districts, the top four teams will advance to divisionals, compared to the three slots available in 2019.

The Pioneers' schedule appears to have firmed up, adding non-league tilts with Denton-Geyser-Stanford Sept. 4 at Stanford and hosting Dutton/Brady on Oct. 3.